Uroosa Arshid, a Firefighter for Nottinghamshire Fire and Rescue Service has been named winner of the ‘Young Person Role Model Award’ in the Women in the Fire Service Awards 2022.

Uroosa, who joined Nottinghamshire Fire and Rescue Service in 2019 as an apprentice firefighter, also became the first hijab-wearing firefighter in the UK. Stationed at West Bridgford Fire Station, Uroosa was nominated in the national awards for remarkable contributions to the Fire Service.

The ‘Young Person Role Model Award’ category recognises individuals who demonstrate being excellent role models. Who have engaged in, and inspired conversations, actions and outcomes around equality and diversity issues and actively embody the motto “if you can see it, you can be it”.

Damien West, Uroosa’s colleague, and nominator described her as having overcome many barriers and challenges to achieve her lifelong ambition of being a firefighter. As the first hijab-wearing firefighter in the UK, he revealed how Uroosa sharing her story with the world led to her becoming a role-model to many people because of her passion, enthusiasm and determination to succeed. 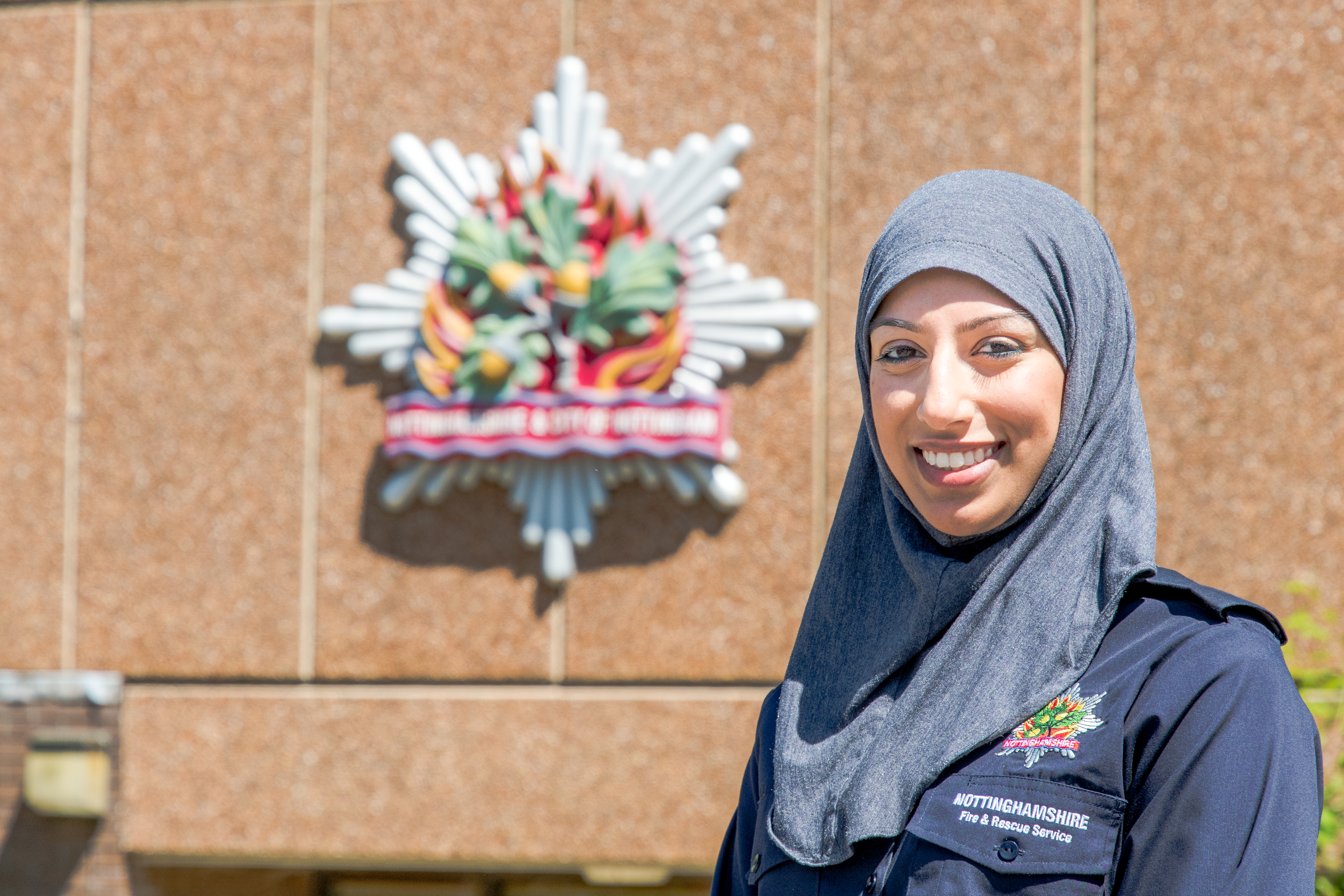 Damien told the panel how Uroosa’s story had received coverage around the world and had inspired many young people to chase their dreams, many of whom wrote to her to thank her for sharing her story.

The award submission explained how Uroosa was a role model in so many ways and to so many people. How determined she was to show young people that they could succeed at whatever they put their minds to. And how Uroosa was passionate about ensuring young people could see a young role model, who looked and sounded like them, working in the fire service.

“It is great news that Uroosa has been named winner of the Young Person Role Model award.

“Uroosa is a fantastic firefighter and being able to tell her story has now given young people around the world hope that they can achieve their dreams of becoming a firefighter, no matter who they are.

“On behalf of everyone at Nottinghamshire Fire and Rescue Service, we want to congratulate Uroosa on this amazing award.”

Speaking on the notification of the award, Uroosa said:

“It is such an honour to have been nominated and to have won this award. It is an overwhelming feeling because it is not something I set out to do, I just wanted to achieve my dream of becoming a firefighter. However, my story has helped inspire other people, which is something I am extremely proud of.

“Thank you to my family and colleagues, as this wouldn’t have been possible without their ongoing support.”

About women in the Fire Service

Women in the Fire Service UK is a not-for-profit organisation who works in partnership with its corporate members to advance equality in the sector.

“I am so delighted that Uroosa has won the Young Person Role Model award. She is an outstanding role model whose positive attitude has inspired so many people. I can’t wait to meet her!”

“The winner of the Young Person Role Model award shines a light on the importance of representation, showing that regardless of one’s background, role models that young people can identify with makes a real difference in daring to follow one’s dreams. The determination and strength required to pursue a dream, and to pave the way for others of a similar background, is the essence of being an inspiration to others.”

Jo Dawson, of Nottinghamshire Fire and Rescue Service, was also nominated in the awards. She recently took on the role of WFS Local Rep after 14 years as a Firefighter. Since then she has fully embraced WFS and its aims, becoming a role model within her service, locally and nationally. She has helped to set up Nottinghamshire’s first women’s support network and through this, also set up a female sports team for women wanting a physical activity to do with colleagues. She has also helped to organise events in support of International Women’s Day – one with Derbyshire FRS, the other with Nottinghamshire Police. Jo was described as an asset to her Service and WFS and “always available to support others and always smiling”.

Winners and runners-up receive prizes, as well as an invitation to attend a special award ceremony in June.

Save Up To 25% On Selected Lines at Bloom

Embrace the Dark with ADT Now!