A mum is campaigning for new vehicles to carry a safety kit by law to save lives after she witnessed a motorway crash.

Claire Whetnall says that having a collection of essential items under the driver’s seat inside a car, van or lorry could mean vital help for stricken drivers before emergency services can reach them.

Fire safety company director Claire was in her car without her children Daniel, 16 and Erica, 13, when she saw two cars crash on the M6 in the North West. She was struck by a thought of what if her family had been with her and what if it had been them in the crash.

In that moment she realised a vehicle safety kit could make a difference. Through her work in fire protection, she had always believed cars should carry extinguishers but witnessing the accident made her also realise more specialist equipment could be needed. 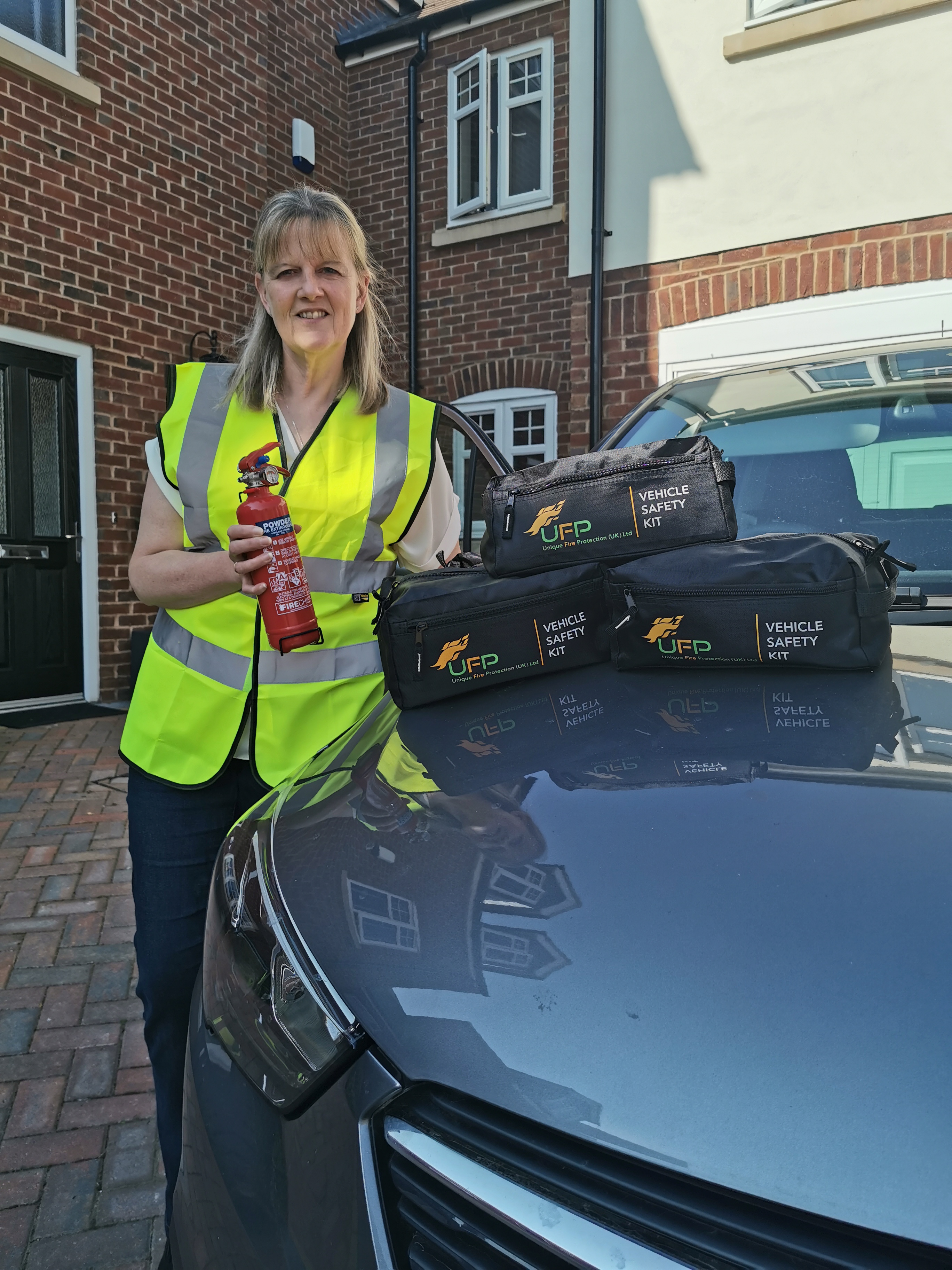 Claire started researching the best items for vehicle safety kits and discovered that providing safety equipment with new vehicles is already law in countries including France, Germany, Belgium, and Australia.

Despite having no experience in sourcing products or marketing, she has worked long hours outside her day to job to produce her own vehicle safety kit and had set herself an ambitious target of supplying thousands of potentially life-saving kits through logistics companies this year before lockdown hit.

Claire believes all vehicles should be fitted with kits but is now focusing her campaign on new and used commercial vehicles. This is because she believes these can bring a greater impact from a crash and that employers have a duty of care.

She has started a petition on Change.org to call for all commercial vehicles to be subject to a new law.

“In general, despite the lockdown of recent months, now and into the future, there’s more traffic than ever on our roads, speeding is on the rise and emergency services are delayed on smart motorways,”

“Those drivers probably thought it wouldn’t happen to them either.”

Claire has worked at her family business Unique Fire Protection in Aldridge with husband Steve, 52, for 10 years, but it wasn’t until she witnessed the two –car smash near Junction 17 on the M6 two years ago that it hit her a vehicle safety kit could make a difference.

“I believe that the vehicle safety kit could be a life saver, that something small could make a big difference when every second counts.

“It could give someone a chance by providing help until emergency help arrives. It’s not just about having an emergency vehicle safety kit, but also where it is kept. Having it in the boot of your car is no good when you are in an accident – how are you going to get to it when it’s in the boot? It needs to be somewhere you can reach it if your seatbelt is jammed or your door is stuck.

“I was stuck on the M6. I used to do this trip every other week to see her usually with my kids but this time was on my own.

“It was a newly opened section of the ‘smart’ motorway, with all lanes open. The traffic was gridlocked due to an accident ahead and emergency services were trying to get through the traffic to get to the accident.

“I was stuck for an hour or so. So, the idea of the kit came first then the thought of lifejackets under the seat on an aeroplane, so grew the idea of having the kit under the driver seat if possible. It was a two- car crash and not too serious, but couldn’t get the thought out of my head that what if it had have been, and if my kids were in the car too.

Claire’s fire safety kit, will be available through her family company, Unique Fire Safety Protection and is in the final stages of branding and design.

Tools for escaping a vehicle:

To ensure you’re heard if you can’t be seen:

For breakdown safety and to aid discovery at night:

Ten per cent of every kit sale goes to road safety charity Brake after Claire became a corporate sponsor.