The legendary Wombles will be at the heart of the nation’s environmental actions as we head towards the United Nations climate change conference (COP26) taking place in Glasgow later this year. They are supporting the UK government’s Together for Our Planet campaign to encourage all of us to go #OneStepGreener for the planet.

COP26 is a pivotal moment and world leaders need to agree solutions that will prevent global temperatures rising above 1.5C, which is considered the threshold for dangerous climate change, and protect our planet and people from the intensifying impacts of rising temperatures. But beyond all this activity on the world stage, each of us has an important part to play. That’s why, in the run up to the Summit businesses, community groups, schools and citizens across the UK are talking about our collective efforts to tackle climate change.

The Wombles will feature in a series of short, animated films on social media explaining how we can all go #OneStepGreener by:

The public, business and communities are also being encouraged to nominate people who they think are making a big difference in the fight against climate change with the aim of recruiting #OneStepGreener Ambassadors, will become the voice of the UK public on climate change and will work closely with the government in the lead up to COP26. 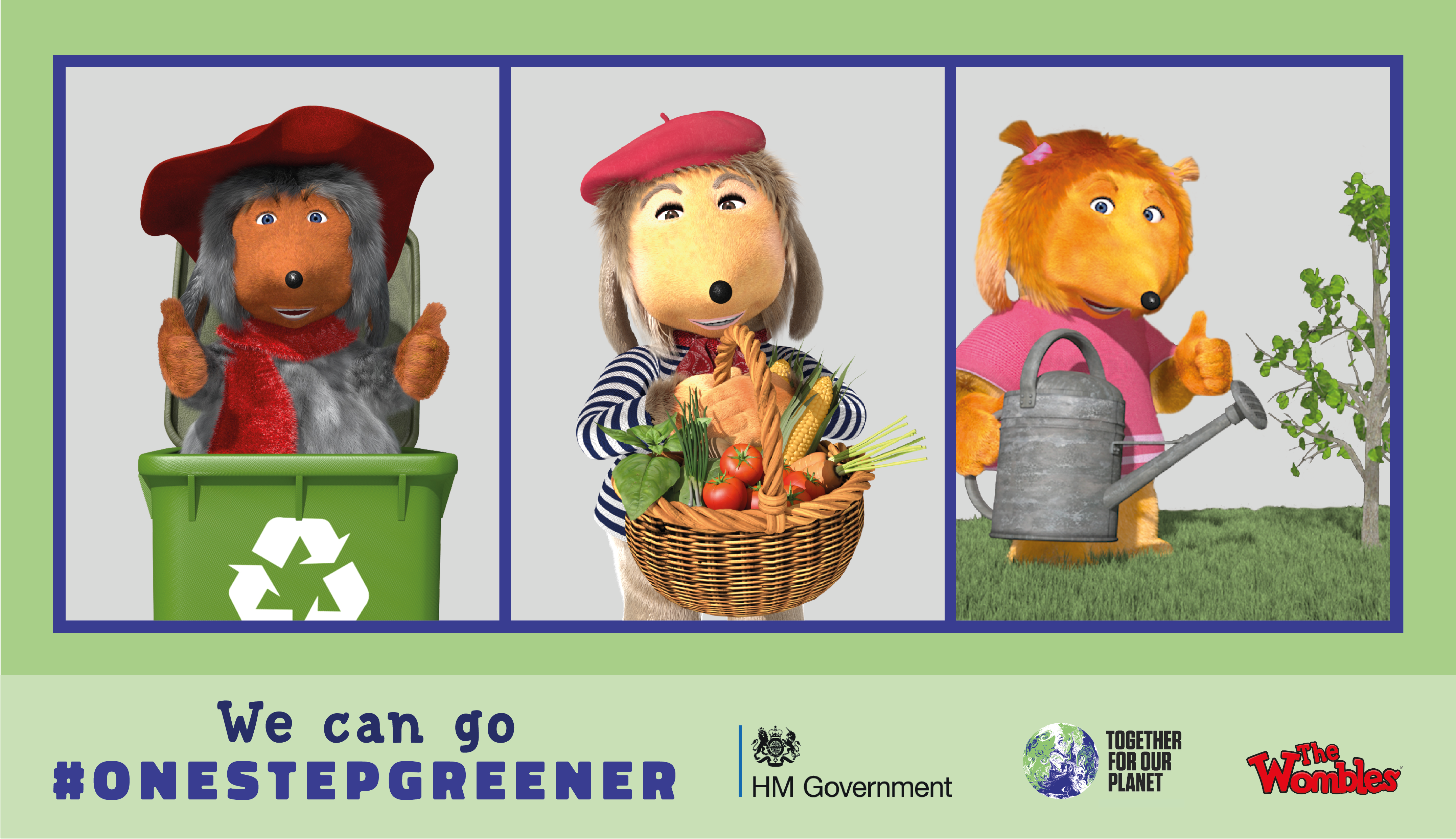 Speaking on behalf of The Wombles, Great Uncle Bulgaria said,

‘We are delighted to support #OneStepGreener. We would like to encourage everyone (young and old) to join-in and do their bit for the environment. If we all behave like Wombles, we can make a difference to the health of our country and our planet.’

The Wombles were brought out of hibernation in 2020 to spread their positive message of local environmentalism. They have been given a CGI-makeover, as part of a major relaunch that aims to inspire and mobilise a new generation of environmental enthusiasts and have been used to support a wide range of environmental campaigns including the annual Great British Spring Clean, #EcoSchoolsAtHome, tree planting, beach cleaning and upcycling. A consumer poll conducted by The Radio Times in 2014 included The Wombles in a list of the top 10 most popular BBC TV children’s characters of all time. Wombles fans (old and young) are encouraged to join the @WomblesOfficial Facebook, Instagram and Twitter channels.

About One Step Greener & Together for our Planet

‘One Step Greener’ is part of the UK Government’s campaign, Together for our Planet, which aims to raise awareness of COP26 and climate issues ahead of November. The Together for our Planet campaign is building momentum in the lead up to COP26 by showcasing how people across the UK are going ‘One Step Greener’ to tackle climate change. Together for our Planet is also working with small businesses across the UK to support their journey towards becoming greener and more sustainable. By November, we want as many small businesses as possible to pledge to go ‘One Step Greener’ and sign up to the globally-recognised SME Climate Commitment, which helps organisations become more energy efficient, switch to electric vehicles and active travel, and become landfill free. By doing so, they can protect the planet and their business, and help us start a green business revolution. This is about all of us playing our part. Together. Now. For our planet.

This November, the UK will host the UN climate change conference COP26, in Glasgow with our partners, Italy. This will provide an opportunity for the world to come together and commit to urgent action. As hosts of COP26, the UK will lead by example during this unprecedented time. The UK has been promoting four key goals to governments around the world, driving real progress on a global scale.

Delivering on these four goals will also make our recovery from COVID-19 one that builds a better future – one with green jobs, cleaner air and increasing prosperity, without harming the planet.

At home, the UK has been leading the way and shown that green growth is possible – over the last 30 years our economy has grown by 78% while cutting emissions by 44%. The UK was the first country to commit to reduce carbon emissions by 78% by 2035 and is on course to be the fastest G7 country to decarbonise cars and vans by 2030.

The Prime Minister’s Ten Point Plan for a Green Industrial Revolution will help us reach our climate commitments, create thousands of highly-skilled green jobs and establish world leading industries in areas such as green finance and technology. At the same time, under the G7 and COP26 Presidencies, the UK has been promoting four key goals to governments around the world, driving real progress on a global scale